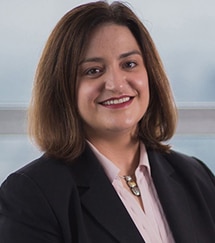 In September 2018, Kelsey was appointed co-lead counsel of MDL 2846, In re: Davol, Inc./C.R. Bard, Inc. Polypropylene Hernia Mesh Products Liability Litigation by Chief Judge Edmund Sargus, Jr.  Kelsey also serves on the Plaintiff’s Steering Committee of MDL 2753, In re: Atrium Medical Corp. C-QUR Mesh Products Liability Litigation.  She has assumed a leadership role in the New Jersey state court litigation against Ethicon and Johnson & Johnson for the injuries her clients suffered after having been implanted with Ethicon’s multi-layered hernia mesh devices.  Kelsey was also elected co‑chair of the American Association for Justice Hernia Mesh Litigation Group.

Kelsey has also managed the firm’s GranuFlo docket for the last several years, including assisting clients navigate the settlement claims process.   In addition to the above, she has done considerable work on the Wright Hip and Accutane Litigations as well as Testosterone Replacement Therapy (TRT) in which she was co-counsel in the first TRT trial in Cook County, Illinois.