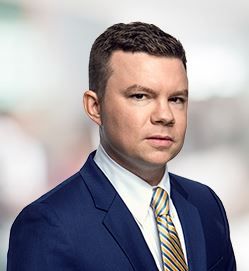 Bill Cash III is proud to be an attorney at Levin Papantonio Rafferty, where he joined as an associate in 2009. He became a shareholder in 2015, and is now of counsel to the firm. Cash lives and works in Chicago. Cash believes strongly that the lawyer, having earned the privilege of representing others in the courts, has an obligation to repay society by assisting those who need legal help but can’t get it. He also believes lawyers have a special role to play in informing fellow citizens about how the law works, so that those citizens play meaningful roles in governance. Cash concentrates his practice in complex civil litigation. Substantive areas of practice include product liability, consumer fraud, engineering negligence, intellectual property, litigating the wrongful deaths of citizens at the hands of police, insurance litigation, privacy torts, and international discovery practice. Cash also concentrates in appellate litigation, from the U.S. Supreme Court down to the lowest levels. Cash has been appointed by judges to lead counsel and plaintiffs’ steering committee positions, and he has successfully briefed and appeared in multiple proceedings at the Judicial Panel on Multidistrict Litigation. Before transitioning to class action work, Cash led the charge in several drug products liability mass torts, including cases against Merck, Roche Laboratories, Boehringer-Ingelheim, and other pharma and medical device defendants. He cut his discovery teeth in these cases, taking and defending hundreds of depositions of fact witnesses, medical practitioners, drug company employees, and expert witnesses. As an associate, Cash was also the lawyer responsible for properly handling thousands of individual plaintiffs’ settlements. Cash particularly enjoys expert witness work, and has served as the lead attorney in retaining dozens of experts to explain technical aspects of his clients’ cases to juries. Perhaps equally as enjoyable and academically interesting, Cash has cross-examined dozens of opposing experts, uncovering evidence that has led some courts to curtail or even eliminate those experts’ opinions at trial. Cash writes, opposes, and argues expert admissibility motions in trial courts, and has repeatedly lectured on expert admissibility standards at conferences around Florida and elsewhere. For years, Cash worked with firm principal Troy Rafferty to lobby against the adoption of the Daubert standard in Florida, and Cash also authored a key brief to the Supreme Court of New Jersey, after which that court elected to retain its liberal admissibility standard for novel toxic tort evidence rather than adopt “full” Daubert in that state. Cash has also written on expert law for the FJA Journal. Cash is also known inside and outside the firm as a good writer who advances a modern style. You will not find legalese or stale idioms in his work. Cash knows, from his two judicial externships and his judicial clerkship, that judges are not happy to receive a meandering 5,000-word brief if a direct 2,000-word brief will do. He credits several professors and mentors over the years with helping hone his style, as well as years of exposure to bad writing by some. Cash admires the modernizing, flexible spirit of the Federal Rules of Civil Procedure of 1938, and particularly admires the 2007 modern-language rewrite.