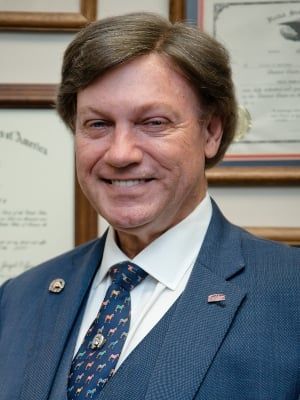 Kevin graduated from the Nashville School of Law in 1983, where he topped his law class in the field of evidence. In 1989, he was admitted to practice before the United States Supreme Court. He is the senior member of The Kennedy Law Firm, PLLC, in Clarksville, Tennessee.
Kevin owned multiple businesses in his career. Kevin is very active on social media and has approximately one million Tik Tok followers.

Kevin has been asked to contribute legal expertise to numerous televisions shows, to include but not limited to, Prominent Legal Issues, Ask the Attorney (Channel 5, Nashville), The Oprah Winfrey Show, Trinity Broadcasting Network, The New York Times, The Washington Post and CNN (worldwide television newscaster). Kevin also co-hosts the Treva & Kevin Show, which has the Legal Corner Time and has produced the God and Country Patriotic Broadcast for more than 30 years.

Mr. Kennedy has hired and trained many lawyers and introduced hundreds of students into the legal internship program at The Kennedy Law Firm. He created his own private courtroom known as the Court of Creativity, wherein more than 26,000 students from across the area have attended mock trials.