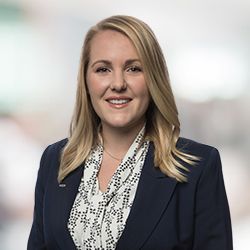 While in law school, Ms. Papantonio was a member of Stetson’s #1 nationally ranked Trial Team, competing in three regional, and four national competitions. In 2019, she was a Regional Champion and a National Finalist at the National Trial Competition. The following year, Ms. Papantonio was a Regional Champion at the National Trial Competition. Additionally, she excelled at the Tournament of Champions and Top Gun trial competition.

Ms. Papantonio also served as a Senior Associate of Stetson’s Law Review. While serving on Law Review, Ms. Papantonio composed an article discussing the complexities of the litigation against opioid manufacturers and distributors and each party’s role in the opioid epidemic.

During law school Ms. Papantonio received the highest grade possible in both Torts and evidence. Upon graduation, Ms. Papantonio was honored by the faculty and staff of the law school nominating her to be inducted into the Order of Barristers, a national organization that provides recognition for individuals who have excelled in advocacy and service at their respective schools. Additionally, Ms. Papantonio received the Richard Harris Ferrell Competition award which is awarded to “the student advocate who has best demonstrated excellence through his or her performance in intercollegiate competitions.”

In her free time, Ms. Papantonio loves to travel, boat, and spend time with family and friends.